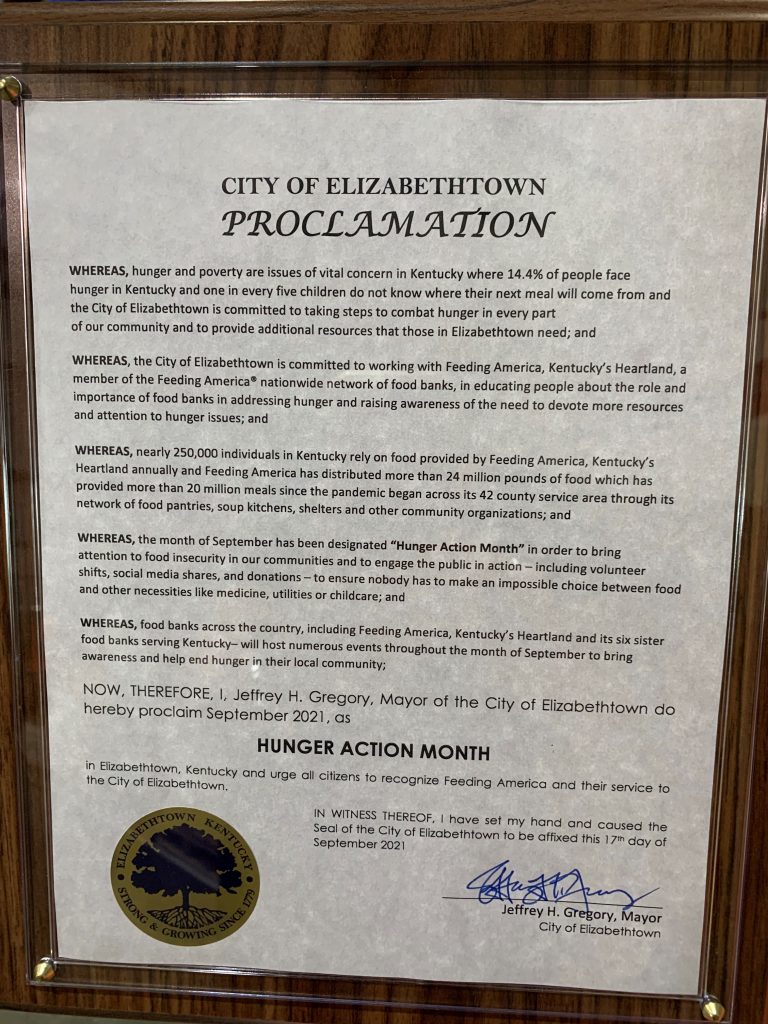 Today is Hunger Awareness Day. Nearly 250,000 individuals in the state rely on food provided by Feeding America, Kentucky’s Heartland annually. The organization has distributed more than 24 million pounds of food which has provided more than 20 million meals since the pandemic began. Still, Feeding America is still in need of volunteers. Schedule a time to volunteer at FeedingAmericaKY.org.

The Pritchard Community Center will begin offering co-ed volleyball starting at the end of the month. “When we renovated Pritchard, we got a new volleyball net and poles. We’re doing a co-ed league, it’s $175 per team. At least 6 on the court at a time, maximum of 8. That will be every Tuesday starting on the 28th.  We’ll start about 6 p.m.,” stated Travis Wells with the Parks and Recreation department. For more information or to register, visit ElizabethtownKY.org.

US 31W Project in Elizabethtown Update

Final surfacing is ready to begin along the U.S. 31W section north of KY 3005 (Ring Road). Crews are installing ground loop sensors and making final adjustments ahead of the top layer application.

Lane closures will continue between 9 p.m. and 6 a.m. each night this week as these final preparations take place.

Completion of final surfacing is expected by the end of the month.

The Elizabethtown Board of Education will conduct a Special Tax Hearing/Board Meeting this evening. The meeting will take place at the Panther Academy Board Room beginning at 5:30 p.m.

Effective today, Hardin County Schools will resume the masking procedures it had in place on August 10th, 2021. Information on these procedures were issued hours before Governor Andy Beshear issued a mask mandate for all Kentucky Public Schools.

“So if the Hardin County incidence rate is 50 or above, all students and staff will be required to wear masks while inside school buildings for the entire week the next week. If it is 49.9 or lower, masks are strongly encouraged but not required,” stated John Wright, Community Relations Specialist for Hardin County Schools.

Masks will still be required on school buses per a federal executive order. Hardin County Schools will post the incidence rate each Thursday on its social media channels, and its website www.hardin.kyschools.us.

Hodgenville Police have reported an uptick in crimes against kids.

“We were actually in a class for Sexual Assault Online Predators, and it came up, the gaming systems that people use like Xbox and PlayStation, and that they were actually using those to contact these kids, and then move them over to apps on phones,”stated Hodgenville Chief of Police, James Richardson.

Keep an eye out for videos on how parents can keep their children safe from sexual predators online. Videos will be posted on the Hodgenville Police Department Facebook page throughout the week.

On Thursday evening, State Representative Jim Duplessis stood at the House to discuss an incentive package for a Glendale industrial opportunity.

“This was an economic incentive package for the Glendale super-site. We should know something, let’s just say before the end of the year if this is going to go through or not. And then if it does, it will be huge,” Duplessis stated. If the offer is accepted, he expects Hardin County to see an increase in educational funding, which will result in higher paying jobs.

Kentucky State Police are searching for two suspects after a high-speed chase on Saturday night in Elizabethtown. According to State Trooper Scotty Sharp, the St. Matthews Police Department reported several stolen vehicles. On Saturday around 6:06 p.m., KSP Post 4 was notified of several vehicles last known traveling southbound on I-65.

KSP located the first vehicle, a white Chevrolet Corvette, on i-65 near the Bullitt County line.Troopers observed another vehicle, a burgundy Chevrolet Corvette, traveling southbound near the 113 mile marker traveling in excess of 123 mph. Troopers attempted to pursue the vehicle, but lost visual before it exited at the 94 mile-marker. The car was later located at the Five Star on North Mulberry. Two other vehicles were located on North Mulberry near the Speedway. The driver of a BMW stopped and the driver fled the scene. The other vehicle, a Jeep Trailhawk, fled at a high rate of speed onto Ring Road. The Trailhawk was later found submerged in Freeman Lake near the Ring Road access. According to reports, the driver exited the vehicle and fled on foot.

KSP is still looking for two black males connected to the stolen vehicles. The operator of the BMW was identified as a black male last seen wearing white shorts, white crocs, and a white shirt in the area of Speedway and Motel 6 on North Mulberry. Another black male was last seen near Freeman Lake and was described as wearing red and black shorts with braided hair. If anyone has information about the individuals, they are asked to contact KSP Post 4 or St. Matthews Police Department.

This evening, Hardin County Schools announced a voluntary mitigation strategy in hopes of keeping students in the classroom. Test to Stay was created by the Lincoln Trail Health Department on guidance from the Kentucky Department of Public Health.

“Day zero is your day of exposure. Then from day 1-5, you would come to the school, you are swabbed. It is a rapid antigen test. You wait with your parent, and then if it’s a negative test you go on in and have school for the day. We love our students and we love our staff. We just want them to know we want to keep them safe and keep them in school as best as we can,” stated Janay Sutton, Director of Health and Family Services for Hardin County Schools.

Students wanting to participate must be entirely asymptomatic and quarantine when not in school. If a student has a positive test, they will be sent home and proceed with normal isolation guidelines. The Board believes this is the best option to keep students safe and in the classroom.

Yesterday, Governor Andy Beshear announced that members of the Kentucky National Guard will arrive next week to assist Kentucky hospitals, including Baptist Health Hardin. They will assist with nonclinical functions within the hospitals to allow hospital staff to focus on patient care. The Governor reported that 60 of 96 hospitals in the commonwealth have critical staffing shortages.