Kentucky State Police are investigating a fatal collision that occurred in Nelson County on Sunday.

Houston and a 15-year-old passenger were pronounced deceased at the scene. No one in Curtsinger’s vehicle was seriously injured. The investigation is still ongoing.

An Upton man has been indicted on multiple charges after the murder of 27-year-old Erica Burden.

On November 9th, 2021, Erica Burden was reported missing. She was last seen dropping her child off at school at approximately 7:55 that morning. Two days later, 53-year-old William “Billy” Burden was arrested and charged with Murder (Domestic Violence), Tampering with Physical Evidence and Abuse of a Corpse.

Burden’s arraignment is scheduled for January 3rd at 10 a.m. in the Larue County Circuit Court Division II under Judge Ballard.

The game originally set for Wednesday was postponed due to positive Covid-19 results within the Cardinals program. The Wildcats are currently looking to find a replacement game for either Wednesday or Thursday at Rupp Arena.

The project, consisting of a 100 megawatt solar farm, has many residents concerned this will take away prime farmland. During the meeting, ibV stated they have plans of allowing landowners to continue farming the land.

“We are going to graze sheep on this project. We also are going to plant bee pollinators to bring the bee population back and monarch butterflies. And the life of this project is a 35 year lifespan for these solar panels. In 35 years, we’ll go back to agriculture,” stated ibV co-founder Robin Saiz. He believes another benefit of the project will be reliability.

“Whether it’s a coal factory, a new factory or something that’s in another part of the state that’s supplying your power down here, if they go offline for something, you now have energy that’s being generated here locally that’s going to provide you grid reliability when other things go offline.”

The project awaits a conditional use permit hearing set to take place next month.

Baptist Health Hardin has announced a temporary location change of their Covid-19 Clinic.

The clinic normally held at the Towne Mall will be moved to Baptist Health Hardin, rooms 5D and 5E on Friday only.

To register for the vaccine, go to Main Admitting, just inside the main entrance. The clinic will be open from 8 a.m. to 4 p.m., and no appointment is required.

The Moderna booster will be the only vaccinations offered on Friday.

The event will begin at 7 p.m. with a presentation from an ibV representative, followed by a Q & A session with a panel of solar development experts.

The meeting will take place at the Hardin County Cooperative Extension Office, located at 111 Opportunity Way in Elizabethtown.

“So with the Innovation Challenge, we’re able to connect our community and the great people of Hardin County with something that is near and dear to our heart, which is innovation. We have been making custom trucks for over 100 years. We understand the importance of STEM and bringing engineering ideas to life,” stated Challenge committee member Katy Howlett.

Ten Teams from within Hardin County, Larue County, and Elizabethtown Independent School Districts participated in this challenge, with the John Hardin FFA team taking home to top prize with their aquaculture systems that will be used to help grow aquatic organisms as a source of food for Warm Blessings Community Kitchen. “We’re here to educate the next generation, and we are excited to take this $10,000 and get started on what we’re trying to do,” stated John Hardin student Dawson Hall.
More than 45 students participated in this challenge. 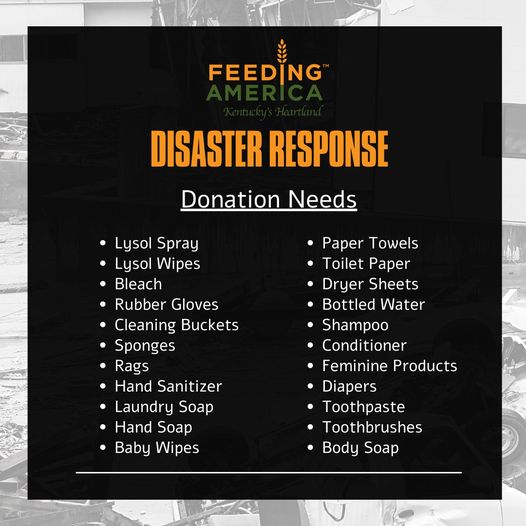 Feeding America Kentucky’s Heartland is collecting items for those affected by the Tornados. This organization serves 42 counties, including Graves County. Their second distribution center in Mayfield was completely destroyed after the tornado that hit over the weekend.

Nolin RECC sent crews out early Sunday morning in response to the devastation caused by a historic winter tornado event impacting several communities throughout the state.

“Our line techs are always eager to get into these communities and help out, because they know what that extra help can mean to these co-ops struggling to make restoration. But particularly now because they are so close to home, these are co-ops that we work with a lot and so it means even more that we are able to get in and help them out,” noted Communications Manager Sarah Fellows.

Ten lineman were sent out to both Warren County and Meade County. The length of their stay is dependent on damage assessment in the area.

The City of Elizabethtown is collecting bottled water beginning today at 3 p.m.

Cases of water can be dropped off at the trailer parked beside the basketball courts at the Pritchard Community Center.

Water will be delivered to those in Bowling Green affected by the tornado.