A Radcliff man was arrested last Saturday after attempting to burn his ex-girlfriend’s apartment down. According to a press release from the Grayson County Sheriff’s Office, the victim reported that William Vanover of Radcliff made threats through text messages, saying he would burn her apartment down while she was at work. When deputies arrived on scene, the door was kicked in, and there were blankets on the floor that someone had attempted to ignite. Vanover was at the scene when police arrived, but refused to give a statement. He was charged with burglary, criminal mischief, arson, and multiple counts of wanton endangerment. He was lodged in the Grayson County Detention Center.

Presbyterian Homes and Services of Kentucky has announced a groundbreaking ceremony at Presbyterian Homes Helmwood set for Wednesday, December 4th. This event will celebrate the addition of the only not-for-profit personal care facility within thirty miles of Elizabethtown. This addition will create seventeen personal care and housing units for seniors who want to keep an independent lifestyle, but require assistance with daily activities. The event will take place at 3 PM at 106 Diecks Drive in Elizabethtown.

A regular season basketball game for a good cause will be played this Monday as James T. Alton Middle School takes on their rivals, North Middle School. The donated proceeds from this game will go towards paying off student lunch debt. Lunch debt for srtudents has reached up to $3000 dollars. 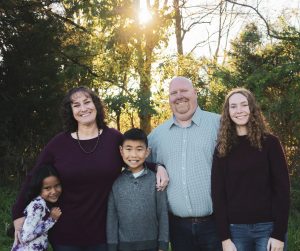 E’town Family Made Complete Through Adoption